Just when you thought you’ve seen it all……

First, an apology to all the KinersKorner fans for the lack of updates. The gang here was sent to the DL, and were supposed to be out for a few hours. We missed a few days. Oops.

Oops may best describe two disastrous parts of yesterday’s game. The first being more historic and will probably cause much mirth in the Bronx, which is the Triple Play that ended yesterday’s 9-7 loss to the Philadelphia Phillies. With Castillo and Murphy on 1st and 2nd and nobody out, the Mets put on a hit and run with Jeff Franceur at the plate. Frenchy, being a Met now, did something that hasn’t been done since the 1920’s: hit a game ending Triple Play. He rocketed a ball to 2B Eric Bruntlett, who stepped on the bag and tagged Murphy. Daniel, perhaps unconsciously acting out the feeling of every Met fan, threw down his helmet in disgust.

What really should have disgusted him is the performance of Ollie Perez. Oliver Perez gave up 6 runs on 2 Three-Run Home Runs (What are those? How long has it been since the Mets had a 3-Run home run?) and did not even finish the 1st inning.

In the ultimate of indignities, Jerry Manuel took out Oliver Perez mid batter after he went 3-0 on……….Pedro Martinez. That bears repeating. He went 3-0 on Pedro.

In an ironic twist, Nelson Figueroa struck out Pedro to end the inning.

Pedro was about the same in his return vs the Mets. Four runs, seven hits in 5 innings. Frankly, if I was a Philly fan I would not be encouraged, as the Mets lineup in its present state resembles a AAA lineup as much as Major league lineup.

As for Perez – we’re stuck with him. That’s the worst part. There is no way he’s not here next year. He is being paid too much to be traded, and he’s too young, too talented and too much invested into to release. You can make a solid argument that Omar could be fired for this move alone. There was no one else bidding close to the amount they paid, and the Mets could’ve had gotten better production and less years from Randy Wolf.

Crying about performance, or Laughing to Bank/

Unfortunately, as usual they succumbed to public pressure when it came to player personnel. There were too many people clamoring for Lowe or Perez, that they didn’t even allow themselves to truly consider alternatives. The worst part is if the Mets get themselves a true #2 starter, they probably don’t even need Perez next year. I think most would go into next year with Santana, a new pitcher, Maine, Pelfrey, and Nieve, Niese and Parnell battling for the 5th spot with Brad Holt or Jenrry Mejia waiting in reserve midseason.

As for the Man who signed him…..

Reports from the Daily News and Post suggest that there is no plan to remove Omar from his GM position nor Jerry Manuel from Manager, according to Fred Wilpon.

Let’s first get this easy one out of the way: Get me the same quote on October 5th.

This is the same organization that gave Willie Randolph the same vote of confidence before he went cross-country to be fired. The same organization that said Todd Hundley is Our Catcher before trading for Mike Piazza. Why should I believe anything now? What use would it be for the Wilpons, Fred or Jeff, to announce lame duck status’s for either man and just cause more controversy.

Assuming they tell the truth, and the Three Amigos of Jeff, Omar, and Jerry are kept together in 2010, at this point I really do not know how awful it is. Jeff we cannot do anything about, and Jerry is hard to judge when he esentially played short, literally and figureatively, all season.

The big issue is Omar, and as much as fans hate to say this, the injuries ARE an excuse. The lack of depth would not be so noticeable or damaging had the Mets not lost all 3 of the most significant offensive players, and 2 of the top defensive players in key positions, for such a long stretch. And maybe because I have some sort of mental defect that let’s me look at things at all angles, but I still find it difficult to blame Omar for not getting another star player midseason when (a) the doctors tell him the players will be back by the All-Star Break and (B) everyone and their mother is telling him to hold onto the farm.

In the end, considering how devastated the Mets team was by injuries, it was a good thing Omar didn’t make a panic move and trade key prospects for star players. Would Mark Derosa really make that big of a difference, and be worth Bobby Parnell?

In the end, the Mets losing the Three Amigos – Beltran, Delgado and Reyes, is what did the team in. More than the depth, more than Perez, more than anything else. If the choice is to give Omar one more shot and not be able to spend as much on the on-field talent, or to change GM’s and managers and be handcuffed, I’d rather take one more shot with this group.

What can I say? I’m a gambler.

(6 months later, as thanks from Omar after reading this post, Omar signs this guy……….) 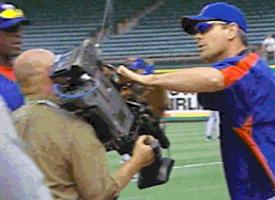 The Gambler is Back!

One response to “Triple Play and the Three Amigos”