Welcome Back Korner Sitters, an appropriate name for whats happening to what was once a very proud and mature fan base.

That’s how the rest of baseball sees us now. Let me tell you a story.

A couple of Yankee fans who I’m friends with, and are actually not annoying jerks who say “nyah nyah – Yanks have another championship and Mets suck again” came over to me a few days ago and ask me a question.

“So what do you think of the new Mets uniforms?”

“What uniforms?” I innocently ask, not knowing the horrors to come.

They then show me a website with the uniform in question. 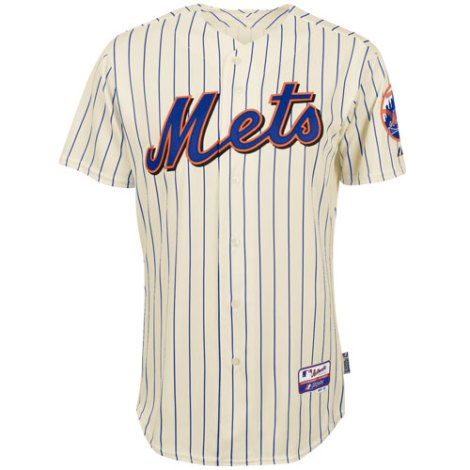 “Looks OK I guess. They just redid the classic 69 Pinstripe a bit.”

They then laughed uproariously. When I inquired why, it turns out these group of people make it a habit to visit various Mets blogs and are regular listeners to talk radio. They especially love when they talk Mets even though they’re Yankees fans cause, “You Mets fans complain about EVERYTHING. You find the littlest thing to cry about.”

I told them to shove off, and then turn on Francessa, and lo and behold I hear several minutes of fans screaming about the uniform.

Then i go read the posts the other day from Metsblog.com and other blogs about the subject. Here’s an excerpt:

“Yesterday, the Mets announced the addition of a 60s-inspired, home retro jersey for 2010, which you can see here.

According to the outstanding UniWatch, Paul Lukas wonders why the Mets needed to issue a press release to announce the jersey, when they could easily have just written:

“You know that pinstriped uni we never wear? Next year it’ll be beige instead of white.”

Lukas also takes issue with the team referring to the new uniform as ‘retro,’ because, unlike the original 60s version, this current model has the black drop shadow, and so, he says, “The Mets can’t even do retro accurately.”

…he is right… it is the essentially the same uniform they’ve been wearing, just in cream… as for the black or the shadow… i used to like it, now i don’t… the problem is, if you look at the list of top selling items from Mets.com, the black shirts and jerseys are always near the top…

…so, as much as i might dislike it, it probably doesn’t really matter what i think, considering i own one official Mets jersey, and i bought it in 1986…”

OK, enough is enough. I get it, people are pissed over last year. However, this nitpicking over EVERY DETAIL that comes out of the Mets is officially retarded. The Mets announce changes to Citifield, something many fans have been clamoring for since the stadium opened, and fans react- “They should’ve done it earlier and why are they announcing it now. They should wait until they sign some free agents.”

What the HELL does one have to do with the other?

The Mets announce a new uniform and now we’re going ape shit cause it’s not a “retro 1969” uniform. They NEVER said it was going to be retro. This is from the original post from Metsblog with the press release. I highlighted the important points:

“The design combines new and old elements of Mets uniforms. The Mets created the retro uniform following research and positive responses to the jerseys the 1969 World Champion Mets wore during their 40th anniversary celebration in August… The natural color and pinstripes were staples of the original Mets uniform when the team debuted in 1962. The Mets will also continue to wear their white uniform at home with the black jerseys as an alternate.”

So now everyone is going crazy cause the Mets announced retro uniforms that aren’t like 1969 – when they say in the press release there are new elements in it. I am sick of this crap every day from this jaded minority vocal fan base. They hate everything Met-related. Ken Davidoff had it right in this column – the Mets are over-hated.

Crying over a uniform. An alternate uniform to be used only on Sundays in fact. It’s a damn marketing campaign having nothing to do with player management. Omar is peripherally involved if at all. He probably just signs off in it. You want to know why they’re releasing it now before any free agents are signed? Do the terms “Black Friday,” “Cyber Monday,” or “Merry Christmas” means anything to you? If you want the Mets to sign big free agents and keep the payroll high they have to make money. How do you make money?

Yogurt, if you will?

As for the “purity of the uniform,” if you want a traditional uniform that never changes go root for the Yankees and be bored for all time. Watch a team so mired in “tradition” that the idea of doing anything new and different that doesn’t pander to the upper class is immediately shot down. As for myself and a lot of fans, I like the fact the Mets try to go with different and current fads. Black was in in the 90s, they tried black uniforms which sold excellently, and still do.

Now retro is in, so they’re going retro while not trying to lose the younger demographic who MAY NOT LIKE THE FULL RETRO LOOK. Sigh. There are enough things to be mad and cry about without LOOKING for it.

I can say unequivocably I am at the point where I am more embarassed by my fellow fans than anything that happened on the field in 2010. That problem is not going to be fixed by a big free agent pickup or gutting the farm system. Somewhere along the way this fan base became spoiled, whiny, obnoxious, bitter, pessimistic fans.

Oh, no. Look what happened to Mr. Met!

What’s next? Throwing garbage at whichever Mets player dresses as Santa Clause cause that player isn’t practicing in winter ball?

We’re gonna get upset that the Mets host events at citifield in the offseason? Or that classic Mets Footage don’t look good in HD?

Seriously, i’m curious. what’s next? Cause I didn’t see this outrage coming, and I want to know when to avoid Yankee fans next time the Mets FANS pull a Bernazard.

One response to “A Crying Shame for Mets Fans”